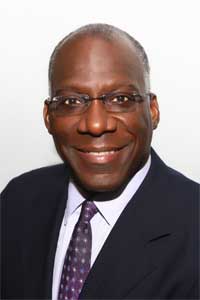 Dr. Sparkman received his early education in Nassau, Bahamas. After high school, he entered Florida Memorial College as a Biology major in 1971. During the summers of 1973 and 1974, he attended Fisk University, Nashville Tennessee for a special pre-medicine programme sponsored by the Kellogg foundation. He then graduated from Florida Memorial College with a bachelor’s degree in Biology in 1975.

As a direct result of his exposure at Fisk, Sparkman gained insights into the field of dentistry, and chose to pursue enrollment into dental school. He was accepted to attend Howard University, and enrolled in 1975 as a member of the dental class of 1979.

After graduation from Howard University in 1979, Dr. Ferguson returned to the Bahamas where he has been, and still is engaged in private practice.

His primary goal was to educate and increase the dental IQ in his country. So immediately after graduation, he set out lecturing to small groups and writing dental articles, which were published in the local newspapers. To this day, he continues to lecture and write educational dental articles for the local newspapers. This commitment was so passionate, that it caught the eyes of Dr. Hal Leyland, a Canadian WW 11 dentist who nominated Dr. Ferguson to receive fellowship in the American College of Dentists in 1991. He was the first Bahamian dentist to achieve this fellowship.

In 1989, the Bahamas Government introduced legislation to regulate dentistry for the first time as a separate entity from medicine. Dr. Ferguson was selected and named the first Chairman of the Bahamas Dental Council. He served in that position until 1994.

For his entire 35-year career, Dr. Ferguson has been a member of the Bahamas Dental Association. In that organization, he has served three terms as president, and two terms each as secretary and treasurer.

In 2005, he was selected to serve on the Government’s Healthcare and Facilities Board. This board is charged with the regulation of the premises where all healthcare disciplines are practiced. He served on this board for six consecutive years.

The Bahamas Government announced Dr. Ferguson’s greatest service to his country in June of 2013 when he was appointed as Dental Registrar of the Commonwealth Of The Bahamas. As the registrar, Dr. Ferguson is responsible for all regulatory matters that pertain to the practice of Dentistry. These range from the examination of dental candidates for licensure, to overseeing all the laws governing the practice of dentistry, and their enforcement.

Apart from his private practice, and the administration of the office of the registrar, Dr. Ferguson serves as Titular organist of Christ Church Cathedral, Nassau. He has been involved in church music for 48 years, and offers a benefit organ recital each January since 2000.

Dr. Ferguson has been a brother of the Alpha Phi Alpha Fraternity since 1972. He supports the activities of his local chapter.

During these years, Dr. Ferguson has raised a family of three along with his wife Dawn of thirty-seven years. They are the parents of Sherise (A neurosurgeon at MD Anderson Cancer Center, Houston, Texas), Sharad (Bahamas Gov.) and Sherelle (A Sociology PhD student at U. of Pennsylvania).