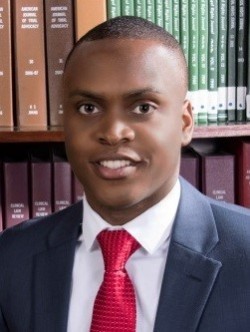 Jarlens Princilis, originally from Haiti and raised in Miami, FL graduated from Florida Memorial University in December of 2013 where he earned a Bachelor of Arts in Political Science and Public Administration. After graduation, Jarlens took a gap year from study to work for the Florida Democratic Party as a campaign organizer. In August of 2015, Jarlens joined the University of the District of Columbia David A. Clark School of Law, pursuing his Juris Doctorate degree.

While in law school, Jarlens was actively involved outside the classroom, holding memberships and offices in many student organizations, including the UDC Black Law Students Association, and the Student Bar Association in which he served as a first and third year Senator. After his first year in law school, he became an Equal Justice America Fellow working in the UDC Housing and Consumer Law Clinic where he had the opportunity to help protect tenants against unlawful and deceptive practices. In June of 2017, Jarlens worked as a student attorney for the UDC Immigration and Human Rights Clinic. Along with his law school clinic partner and under the supervision of two UDC law professors, he won his first asylum case for a Honduran mother with two minor children.

Jarlens finished law school early in December of 2017 and passed the Florida Bar Exam as a first-time taker. He is currently working on a Certificate of Economics for Lawyers from George Mason University Antonin Scalia Law School and planning to start his own law practice in Miami, FL, focusing in immigration and criminal law–with a mission to provide zealous advocacy for those who are on the right side of the law. In the near future, Jarlens has aspirations to run for public office and serve his community to best of his abilities. He is a firm believer in Colin Powell’s famous eloquence: “A dream doesn’t become reality through magic; it takes sweat, determination and hard work.” Jarlens is a proud member of the Florida Memorial University Alumni family.